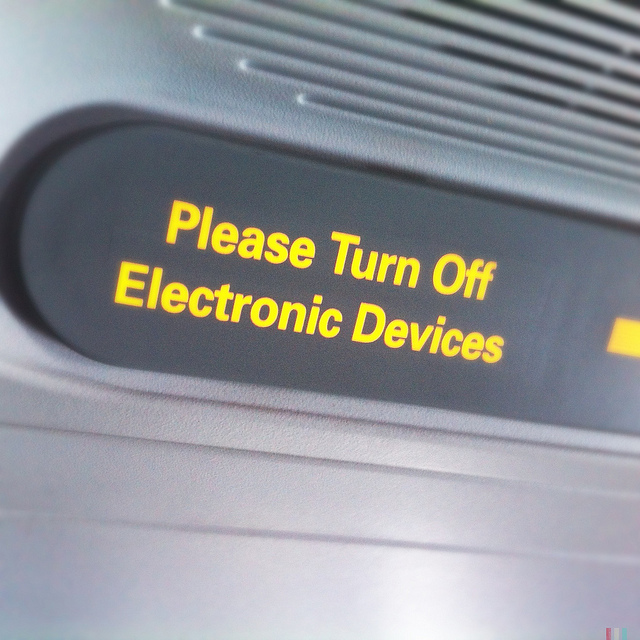 Every time I’m asked to turn off my electronic devices for take-off or landing, I ask myself this question. And to the passengers around me. The answer is usually something along the lines of “never really thought about it,” or “It’s not been proven but they ask you to turn it off anyway, just in case.”

Imagine electronics do pose a danger to the aircraft’s systems. If this would be the case, would airlines really want to depend on the willingness of their passengers to simply comply with the request to turn it off?

I don’t think so. There are plenty of passengers who either forget to turn their devices off or just don’t believe it will cause a problem.

If electronics would really pose threat, they wouldn’t even be allowed on the plane in the first place! We would have to check-in all our mobile phones, iPads and laptops. These items would then go through a specifically designed scanner that can detect any radiation emitting device.

To be completely safe, electronic items would be placed in radiation blocking boxes, in case any radiation emitting device has somehow made it to the aircraft undetected.

The reason we’re being told to turn our devices off is clearly not the real reason. The question that remains is:

What is the real reason that we can’t play on our iPad during take-off and landing?

Is it because airlines don’t want us to have something in our hands during take-off and landing? If something happens, iPhones and laptop flying around the cockpit would certainly be a safety hazard.

Or maybe they don’t want us to be distracted by our devices. Being alert in case of an accident might increase our chances to survive.

If one of the two is the real reason, then why is there so much emphasis on actually turning the equipment off? Just putting it away would be sufficient. Also, we are allowed to read a book for example.

I’ve done some research on the internet, but haven’t found anything conclusive. Most sources state that

There is no evidence. What surprises me most is that there have been very few studies on the issue.

I suggest the following:

Let’s have an unmanned plane filled with all sorts of devices fly around the planet non-stop and measure the interference with it’s systems. If we can put people on the moon, clone sheep and transfer organs, then surely we should be able to figure this one out.

Until then, I will secretly turn my iPad back on after the flight attendants sit down for take-off or landing.

Update: The FAA loosens rules for e-devices on airline flights. Passengers will soon be allowed to use e-readers, tablets and other electronics from gate to gate.

I’d love to hear your opinion on this: do you think electrical devices really interfere with aircraft navigational systems?

I will ask my friend, she is a flight attendant ;-)

Looking forward to hear what she has to say!

Hi Jasper, I think the real reason is that is always been like that. If they would change it they would probably face lots of criticism (and lawsuits) if something actually would happen. There would probably also be a problem with other passengers that do believe it's dangerous and therefore would become flight-scared. I guess it's "Better be safe than sorry" and "Don't fix anything that is not broken". Thanks Victor Björklund

Fair point Victor! I suppose no airline would want to be the first to change it until an authority like the FAA declares it safe.