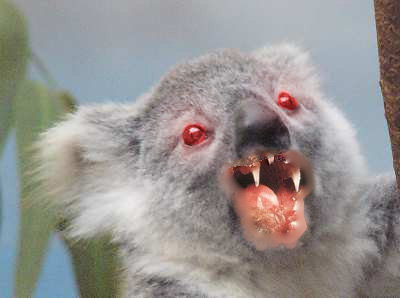 When you think of dangerous animals in Australia, the crocodile, the snake and the shark come to mind first. But did you know the most deaths amongst tourists are actually caused by a very different animal?

The Drop bear is truly an assassinator in disguise. It cleverly mimics the behavior of one of the cutest animals on the planet: the Koala bear. But don’t let its friendly appearance trick you. Underneath it’s soft, fluffy fur lives a ferocious killer.

The Drop bear patiently waits for its prey, holding onto a branch in a Eucalyptus tree. Its diet consists mainly of tourists, who are often unaware of its existence and mistake it for it’s adorable cousin.

Once the tourist enters the so-called “Dropzone,” the area that the Drop bear can reach from its position in the tree, it suddenly releases itself from the branch. After a few seconds in free-fall, the Dropbear lands on the tourists’ head. It jams its razor sharp teeth right into the victim’s main artery, while suffocating the poor tourist with its claws.

Last year, a staggering 424 attacks were reported, resulting in 381 deaths. That’s a 90% fatality rate, much higher than any other animal on the Australian continent. In an effort to decrease casualties, the Australian government recently started a media campaign to warn tourist against Dropbear attacks.

“We have put up warning signs in all Drop bear infested areas,” says Mr S. Corpion of the department of Dangerous Fauna Management. “But the Drop bear is a smart bear, it migrates so you never know where it will show up.”

The best precaution tourists can take is not to walk underneath the Eucalyptus trees. As long as people are fascinated by Koala bears, tragic Drop bear attacks are expected to continue to take place. Be warned!

Haha watch out for the Hoop snake as well!

Yep that one can be quite ferocious as well :D