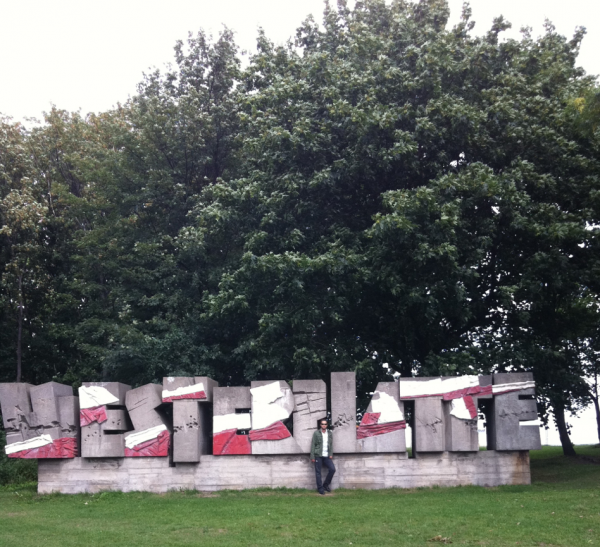 Do you know where the 2nd world war started? Or, to be more precise, where the first shots were fired? I knew it was in Poland, but I had no idea where exactly until I visited the city of Gdansk.

Just outside the city lies a small peninsula named “Westerplatte.” This was the scene of the first battle of world war II. It now functions as a memorial site and it hosts a small museum. During my visit to Gdansk, I took the short boat ride to this historic site to find out what happened exactly.

September 1st, 1939, early in the morning. A German battleship the “Schleswig-Holstein” is docked in the harbor of Danzig (now known as Gdansk). Officially, the ship is paying the city a “courtesy visit.” The real reason for its presence is about to unveil itself.

At 04:45am, the vessel opens fire on the Polish settlements that defend the Westerplatte. Soon after, German infantry units disembark to join the attack. A fierce battle arose, as the Polish defenders fought back from well-concealed positions, causing heavy casualties on the Germans, who were forced to retreat.

Another two assaults were attempted the same day, but the Polish soldiers managed to fight off both attacks. The Germans, surprised by the resistance they encountered, bombarded the Polish positions repeatedly with heavy artillery. In addition, the German Airforce (the Luftwaffe) carried out several bombing raids.

The Polish troops were heavily outnumbered. A small group of 180 men was facing over 3000 Germans. They fought heroically for their motherland and managed to repel the German attacks for an astonishing seven days.

Being out of supplies and ammunition and with no reinforcements on the way, the Polish commander Sucharski found himself in a desperate situation. Surrender was the only option.

As I walked around the area, I came across several ruins and bunkers, one of which was almost untouched. Quite astonishing, giving the intensity of the fighting that had occurred 70 years back.

A small outdoor exhibition is on display, featuring the history of the Westerplatte, not just during the war but also the role it played in earlier and later years. It was originally developed as a spa resort, until the Polish Army turned it into a military depot, due to its strategic position.

In memory of the heroic soldiers who defended the peninsula during the war, a monument has been put up. Only about 20 Polish soldiers lost their lives during the battle. German casualties were at least ten times higher. This served as an inspiration for the Polish Army fighting elsewhere in Poland and the battle is still regarded as a symbol of resistance to the invasion.

Facing the memorial site is an open field. The trees that have been planted on its edge each have a letter attached to it. Together they form the Polish phrase “never war again.”

To get an idea of what the start of the battle looked like, you can watch the bombardment of the Westerplatte by the German battle ship Schleswig-Holstein in the video below.