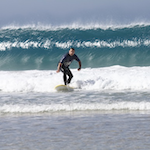 I had only slept a few hours when my dad woke me up at 3.30 am. We had to make an early morning flight with Ryanair to Fuerteventura, one of the Canary Islands. Our final destination was the little town of Corralejo, the surf capital of the Canaries.

I was pretty new at surfing. I had taken the odd lesson over the last few years, but hadn’t passed the beginner stages yet. When we arrived at our first surf spot, I was a little worried.

The waves seemed much larger then what I felt comfortable with.”Were are not going to surf on the waves”, my instructor quickly clarified. “They are unsurfable, we will practice on the white water!”.

Warming up on the beach

After a quick warm up, we went in. I quite liked the ‘white water surfing’. It’s much easier to stand up after the wave breaks. My previous surf experiences weren’t of the pleasant kind. Instead of catching waves, I’d typically go nose down into the water, with the wave crashing on top of me.

After a few underwater spins, I’d surface gasping for air and with water coming out of my nose. The washing machine is the surf-term for this experience I believe.

At night I’d join my dad for diner at one of the many fish restaurants. Most nights we’d enjoy our meal sitting outside, enjoying the view of the nearby island of Lanzarote.

The local menu consists mainly of creatures that live in the sea. Not surprising, as the Canary Islands are located in the Atlantic Ocean :). And off course, you can’t go to Spain without indulging in the local selection of tapas!

Tapas for diner with my dad, of course with a glas of vino blanco 🙂

A short boat ride separates the small and uninhabited island of Lobos from Fuerteventura. The Island is named after the seals that used to inhabit the island. The only seal that’s left is a statue, we were told by a friendly lady at the visitor center. It’s unclear whether they were slaughtered for their fur or because of the unwanted competition for the local fisherman.

Lobos Island has some unique flora and fauna

The volcanic island doesn’t seem that interesting but it has some unique flora and fauna, with a number of plants that cannot be found anywhere else on the planet. Because its great ecological diversity the site has been designated as a protected zone.

If you ever visit this island, make sure you reserve a meal in the islands only restaurant upon arrival. After a two hour hike, a delicious sea-food paella will be waiting for you!