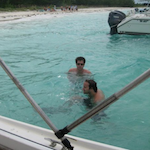 Lobster hunting in The Bahamas

It’s good to have a friend, but it’s better to have a friend in The Bahamas! Dom is an old university friend, famous for his eerily seductive dance moves. If you have a local friend when visiting a new place, it generally makes for a much better experience. This was no exception.

Two of my friends, Andreas and Christophe, joined me for this excursion. Our first night out began at the US style nightclub ‘Aura,’ where Dom managed to get kicked out for allegedly being drunk (even though, as unlikely as it sounds, he had yet to have his first drink). I can’t really blame the bouncer though, as Dom’s dancing style mimics a drunken stagger-dance pretty well.

The next morning, we set of for what was going to be the highlight of the trip: lobster hunting! Dom and his friend Dan took us out on their boat as we cruised over the flat, crystal clear waters of The Bahamas.

En route to the lobster hunt!

The concept of lobster hunting seems quite simple: you grab a spear, dive in the water, find a lobster, and snag it with a spear. For the locals, this is a simple, routine task. For someone like me, who spends 99% of his time in cities, it’s immensely difficult. My biggest impediment was my inability to hold my breath for more than a minute. By the time I found the damn lobby, I needed to go back up to get some air.

Fortunately, lobsters aren’t particularly smart. Once you have located one, it won’t go anywhere. It basically just sits there waiting for you to come back and catch it. So after an hour of practicing, I finally managed to catch my lunch.

The small ones are really hard to catch!

Upon returning to the boat, I displayed my spoils to my friend Andreas. While we were out hunting, he was kind enough to stay on deck to supervise while rubbing his belly and enjoying the sun.

Even though I was beaming with pride, he wasn’t very impressed with the size of my lobster. In retrospect, I think he was worried that it wouldn’t be big enough to satisfy his slightly larger than normal appetite. And by slightly, I mean massively. Fortunately, Dan did a better job, catching several decent sized lobbies. It looked like we would have enough for a decent lunch.

The best part of the hunt was ahead of us: eating the lobsters! We drove the boat to a nearby uninhabited island and started building a make shift barbecue. With just a touch of juice from some local growing lemons, we ate the freshly prepared lobsters beside a deserted beach.

They were, without a doubt, the most delicious tasting lobsters of my life! We cracked a few Coronas, sat down in the warm sand, and watched the horizon as we shared stories from our lobster hunting adventure.

Can't wait to go back in a tropical destination again, not sure our Amsterdam reunion will allow such adventures. When are you posting on Similan Island? That was a cool one too! See you in two weeks...

What a fun adventure!! I definitely will return to Bahamas again. This time, now that I know how to SCUBA, will participate in the lobby hunting. Cheers!

It was superfun! Can't wait for our next adventure in Hong Kong!

This looks like a lot of fun but I have a feeling I'd be all thumbs for a while until I got the hang of it.

It's actually surprisingly easy once you've found the lobster and you can hold your breath long enough to spear it :)

Would like to see more photos of the beautiful ocean...

I will add a gallery with some great pictures soon! Thanks for the feedback :)

Where in the Bahamas was this pal? Nassau based or some other island?

Hey Andy, we took my friend's boats which is docked in Nassau, the spot where we caught the lobsters is about 30 minutes away from there. If you go to the Bahamas let me know and I will hook you up with my friend.